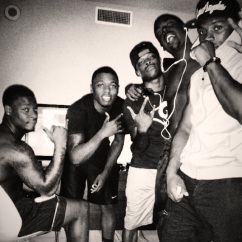 “Multifaceted” is the word hip-hop artist Bizzoe uses when he describes rookie Steelers running back LeVeon Bell. LAB – as we refer to him – debuted his musical talents the other day when he hopped in the booth with MOB artists Riggz and Madd Rich.

We know the tracks are hot so I’ll just skip the gassing. But if I were going to gas, this would have been the line to do so.

In the past we have posted new music to our Youtube Channel, which we will still do on occasion; however, we plan on using YouTube for those exclusive freestyle videos for the most part (like this). We will primarily use Sound Cloud to release new songs as we see fit to share them. With the launch of our Sound Cloud account, we want to share two new songs from yesterdays studio session!

The first track titled “Millionaire” features all three artist where they basically brag the entire time! LAB especially was bragging but I mean…all facts. This track is made to get you ON 10, but the beat is semi-slow and mellow.

“First Flight” is the second track, and my personal favorite. This track also features all three MOB members and it’s one of those “ah-ha!” moments put into song. LAB speaking of his first flight out of Columbus and how it changed his life forever. Madd and Riggz are speaking about their first flights when they took their recent trip to Miami, Florida. I love this one because the beat has a nice amount of bass (not too much, not too little) with a mix of guitar. A very chill song. The type you just kick back and ride out to. Ya know? Plus lyrically, it is always amazing to hear how your average guy next door can make their dreams come true.

Take a listen for yourself and let me know what you think!